What controls the millennial-scale climate variability in simulations of the last deglaciation?

The transition between the last glacial maximum (LGM, about 21,000 years before present) and present, which is referred to as the last deglaciation, was characterized by a significant warming and a series of abrupt climate changes. By conducting a first systematic ensemble of hindcast simulations for the last deglaciation with the Max Planck Institute for Meteorology Earth System Model (MPI-ESM), Marie Kapsch, Uwe Mikolajewicz, Clemens Schannwell (scientists at Max Planck Institute for Meteorology) and Florian Ziemen (now at German Climate Computing Center) showed that MPI-ESM is capable of simulating abrupt climate changes. However, the exact sequence of abrupt events depends substantially on the glacial configuration prescribed from ice-sheet reconstructions and the method of distributing meltwater from retreating ice sheets. 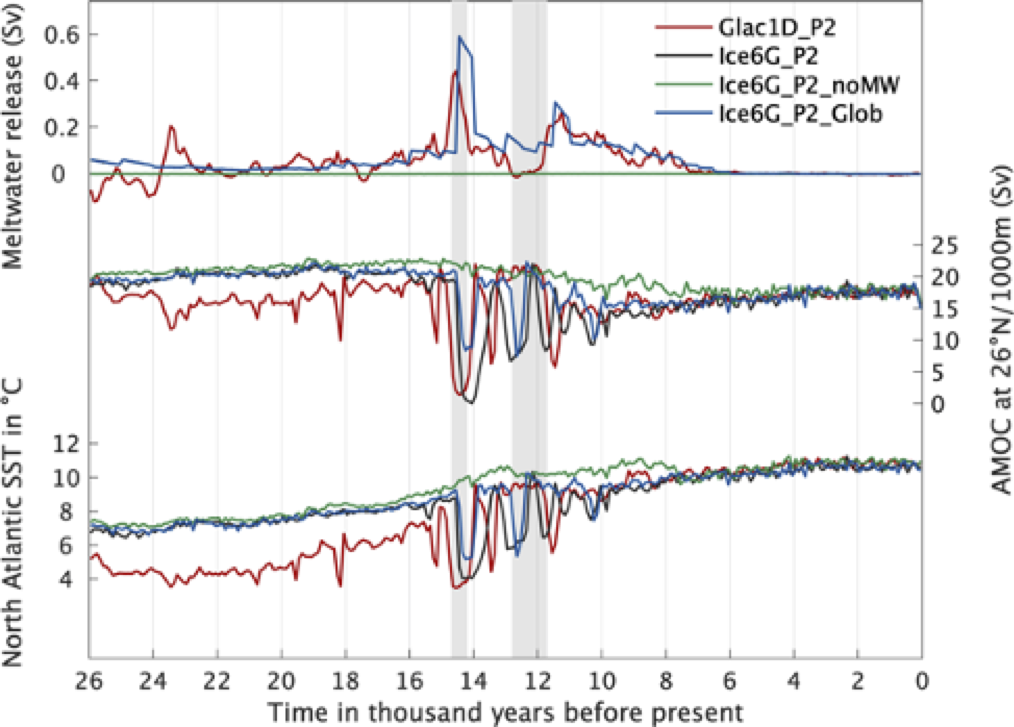 The large ice sheets over North America and Scandinavia disintegrated about 10,000-20,000 years ago during the most recent deglaciation. The causes of the transition between glacial and warm conditions are thought to be slow changes in the Earth's orbit and its orientation to the Sun, occurring over thousands of years, but they are also accompanied by abrupt changes in global ocean circulation that occurred in decades to centuries. These abrupt changes are thought to amplify the more gradual external influence by altering the exchange of heat and carbon dioxide between the ocean and the atmosphere, thereby enabling deglaciation to proceed. However, so far it has been a mystery why a similar link between gradual orbital changes and abrupt shifts in ocean circulation have not led to deglaciation earlier within a glacial cycle. The outstanding question has been ‘what is so special about deglacial shifts in ocean circulation as opposed to those earlier events?’.

A new study lead by Gregor Knorr from the Alfred Wegener Institute and an international team offers an explanation. With the help of climate simulations, the authors can show that the basic state, in particular the stratification in the ocean during the ice age was quite different from today. According to the new results, changes in ocean circulation at the end of the last ice age can lead to a doubling of the net warming rate across Antarctica. The authors argue that this led to increased global warming and greenhouse gas concentrations, accelerating the disintegration of the ice sheets. "Deglacial shifts in ocean circulation are special because they tap into deeper water masses that are on average less cold (compared to intermediate depths) and saltier than at any other time during a glacial cycle," points out Gregor Knorr, the study's lead author.

Stephen Barker, co-author from Cardiff University's School of Earth and Environmental Sciences, UK comments: “This provides an explanation for the failure of analogue events during sub-glacial conditions (e.g. MIS3) to produce a glacial termination.” Deciphering the critical ocean processes in a warming Earth is quite crucial for finding tipping points in the climate system, adds Gerrit Lohmann, co-author of the study.

Figure: Temperature difference between the glacial and interglacial anomalies in response to a weakening of the Atlantic meridional overturning circulation.  Shown are conditions between model years 100 and 200 as a 100 year mean, zonally averaged in the Atlantic sector (modified from Fig. 5 in Knorr et al., 2021).

Can climate change result in a collapse in parts of the Earth system, what impacts would these events have on society, and can they be predicted? In the article published in Nature Geoscience, an international team of natural and social scientists have reviewed abrupt shifts in the Earth's past in order to sharpen their tools for predicting the future. They used well-documented abrupt changes of the past 30 thousand years of geological history to illustrate how abrupt changes propagate through the physical, ecological, and societal components of Earth System.

Prof. Victor Brovkin from the Max Planck Institute for Meteorology (MPI-M) and the leading author of the study, says “For humans, it is crucial to anticipate the future, we need to know what are surprises ahead. It sounds counterintuitive, but to foresee the future we may need to look into the past. A chance to detect abrupt changes and tipping points – when small changes lead to big impacts - increases with the length of observations. This is why analysis of abrupt changes and their cascades recorded in geological archives is of enormous importance.”

A possibility to decrypt an upcoming abrupt change in temporal or spatial patterns is a novel, powerful method called early warning signals. Dr. Sebastian Bathiany, an author from the Helmholtz-Zentrum Hereon, explains: “There are useful statistical indicators that can be interpreted as precursors of abrupt changes. Those include so-called slowing down before abrupt changes in oceanic circulation, or increased spatial variance of vegetation cover before the end of African humid period. At the same time, one needs to be cautious as some abrupt changes, such as the Black Sea flooding about 9.5 thousand years ago, cannot not be detected with such methods”.

For the study, it was important to decide on the conceptual framework for the analysis, including terminology. Prof. Martin Claussen, a co-author from MPI-M, comments: “How abrupt is abrupt? There are many definitions of abruptness, they are really context-dependent. Changes in most records evaluated in our study are about ten times faster than changes in the relevant forcing”. 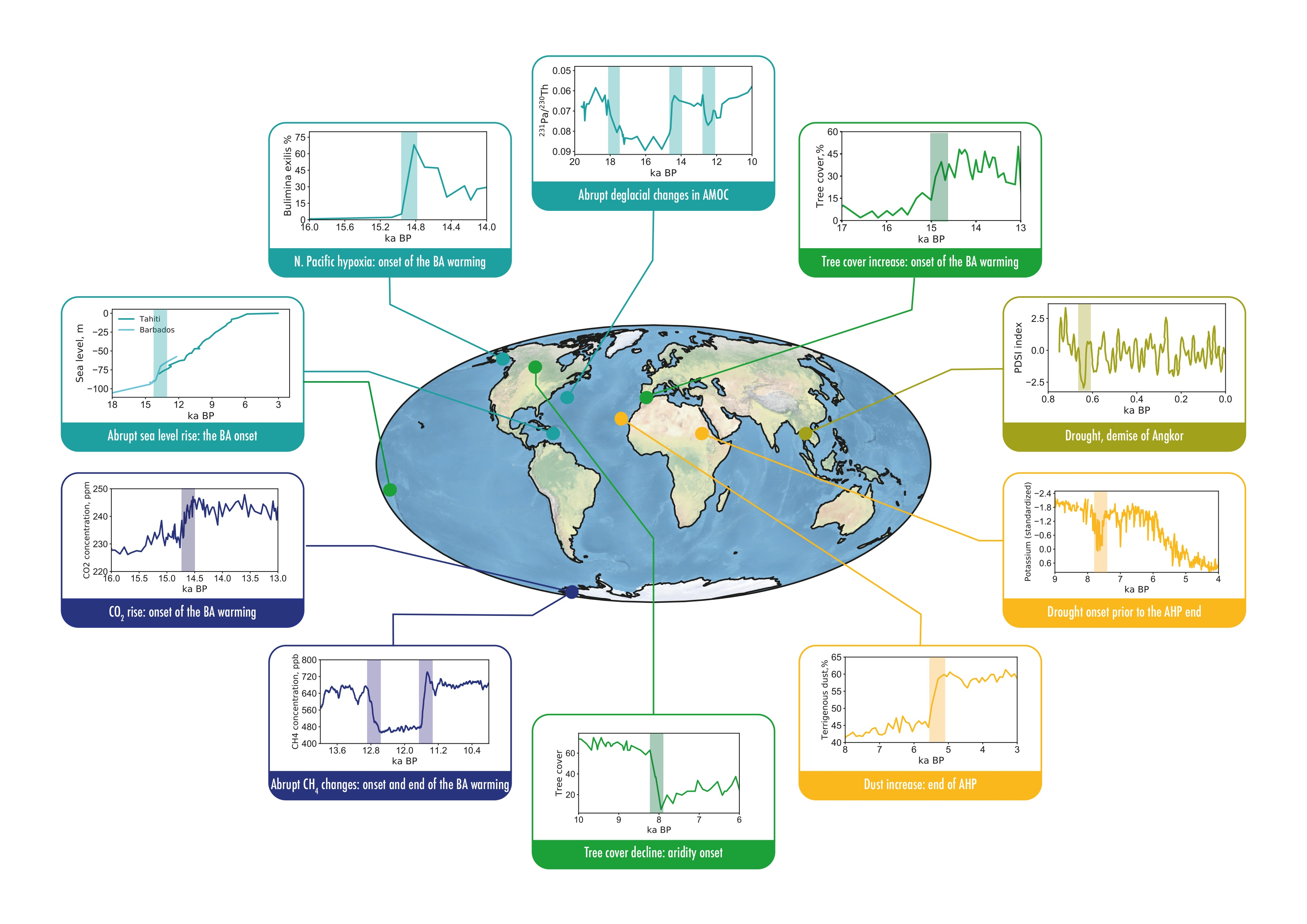 A map of selected atmospheric, oceanographic, ecosystem, and societal records with abrupt changes or tipping points discussed in the article (Fig. 3 from Brovkin et al., 2021).

Abrupt changes in the Earth system are not limited to one particular domain but can cascade through space and time. Dr. Jonathan Donges, a co-author from PIK, comments: “ice-ocean interactions, for example, during onset of the Bølling-Allerød warming in the middle of transition from the last ice age to the current Holocene warm period, lead to cascading impacts in deep ocean anoxia, vegetation cover, and atmospheric CO2 and CH4 concentrations. These changes could also interact with and amplify each other, and propagate among different spatial scales, to eventually affect human hunter-gatherer societies at that time”.

Prof. Michael Barton, Arizona State University, USA, notes, "We are increasingly concerned about the potential for abrupt changes resulting from human impacts in coming decades. Equally important, however, are societal dynamics that can make seemingly resilient human systems vulnerable to abrupt economic or political change - or even collapse - from otherwise manageable environmental fluctuations. Study of past socio-environmental tipping points can give us important insights needed to plan for future ones."

“Earth’s recent past shows us how abrupt changes in the Earth system triggered cascading impacts on ecosystems and human societies, as they struggled to adapt," said Professor Tim Lenton, Director of the Global Systems Institute at the University of Exeter, UK. "We face the risk of cascading tipping points again now – but this time it is of our own making, and the impacts will be global. Faced with that risk we could do with some early warning signals: What examples from the past show is that different climate, ecological, or social systems all become slower at recovering from perturbations before they reach a tipping point – where they fail to recover at all."

This paper is an outcome of the workshop “Abrupt changes, thresholds, and tipping points in Earth history and future implications” held in Hamburg, Germany in November 2018. The workshop was officially endorsed by the Analysis, Integration and Modeling of the Earth System (AIMES) and Past Global Changes (PAGES) projects of Future Earth. 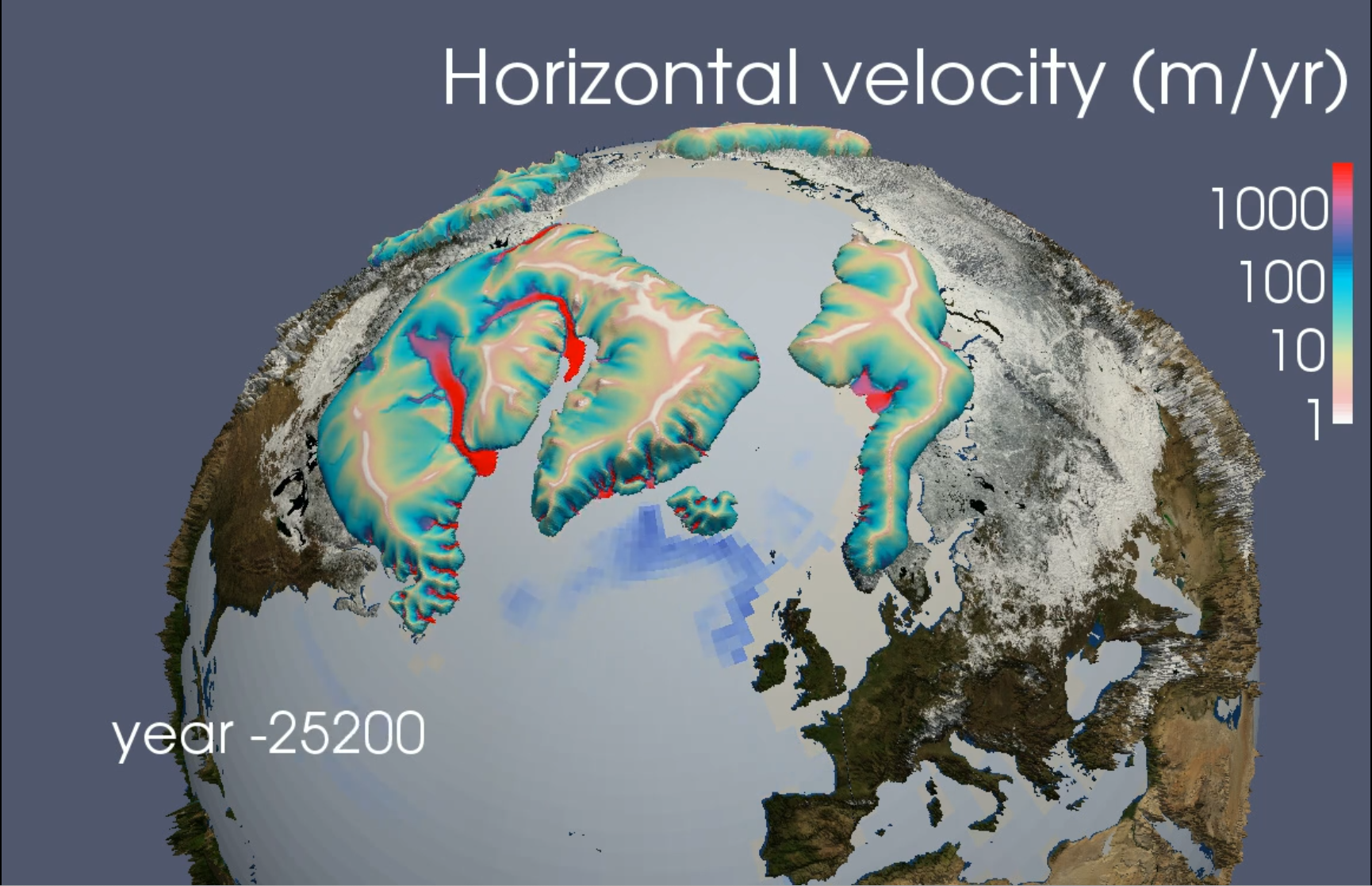